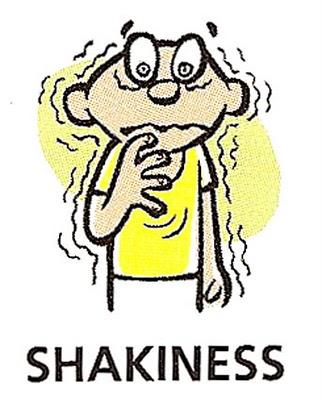 So this is what that has happened to me this week. I ignored all the warning signs and ended up in an ambulance on Friday.

I started to feel abnormally cold at work and was falling asleep. This escalated into severe chills over the next two days which left me shivering uncontrollably. Turning the heating up to 80 degrees, plus sitting next to a portable heater with three layers of clothing did not help. I took myself off to the GP and was diagnosed with a kidney infection and given antibiotics.

However, my relief was short-lived. Only hours later my chills became much more severe. I thought I was going to collapse. The GP came out and declared that I was indeed in danger of collapsing and quite possibly hitting my head on something because my blood pressure was extremely low. He called an ambulance who told me upon arrival that they would only take me into hospital if I was deemed serious enough. After 10 minutes the Paramedics decided that they could not stabilise my vitals nor guarantee my safety so I was taken in.

If only I had heeded the warnings of my severe chills instead of putting it down to stress or overwork or a brewing cold.

At the hospital the blood technicians were unable to draw blood after 30 minutes of trying because, I was told, my body was severely dehydrated and my blood pressure was too low. “It’s like you don’t have any blood”, one technician told me. The consultant whom I was assigned to managed to get blood out of me some hours later after I had been administered some treatment.

Contrary to what people think severe chills are not just associated with kidney infections. In fact after a scan my kidneys were declared clear. I have a viral infection instead. I have lost a stone in 5 days and this wasn’t the way that I had envisioned losing weight in the new year.

I have also learnt that water is not the best way to hydrate yourself, milk is the best option. I have switched to drinking Alpro Soy with Coconut and my energy levels have started to crawl up. I am no where near normal but am getting better.