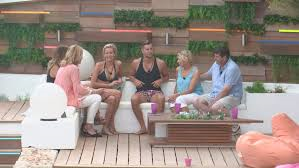 The producers of Love Island staged a coup of sorts when they invited the parents of the remaining contestants onto the show because it was a game changer. The show went from being a voyeuristic visual of flesh, cleavage and sex to one injected with a sense of warmth and charm.


Those objects of lust, entertainment and trivia, otherwise known as the contestants, were cast in a different light all of a sudden and it was fascinating watching them interact with their parents.


If I had stopped to think about what sort of parent would condone their child going on a programme like ‘Love Island’, which I hadn’t, I probably would have been quite judgemental in the way that Piers Morgan was on ‘Good Morning Britain’.  I am one of those mothers who would balk at the thought of my daughter ever even vaguely thinking about applying to go on ‘Love Island’.


The thought of her hanging out on a TV set dressed in bikini after bikini would cause me no end of worry because she would be nothing more than a binary object of either lust or ridicule to viewers. There doesn’t seem to be a half-way house with the women contestants.


Also, I do rate academic qualifications very highly, perhaps too much so, and this is in no small part due to my cultural upbringing.


However, I did feel challenged by the way in which the parents were able to tease out their children’s strengths and accomplishments and do it in a way that was akin to textbook parenting i.e be supportive unconditionally. I can’t say that I could have done the same.


Granted there was some soft telling off about sex in front of the cameras but, overall, it was pretty impressive parenting.


This episode of ‘Love Island’ was fascinating because, up till then, I had hardly watched the series and had, from the trailers shown, assumed it to be numero uno trivial nonsense that artificially talked up the benefits of being shallow. Placing all this in a paradise like setting was something that I disagreed with for the false sense of ‘success’ that it sold to young people.


While I still think that some of this is true, I did find much that was entertaining and heart warming.

Ironically I had only tuned in to watch it while waiting for a political programme to come on. My daughter, whom I frequently blog about, would describe this as a typical situation. Instead, I was engrossed waiting for the next set of parents to come on to find out what it was that they were proud of. Kudos to them and I am not the only one who found it all quite touching.

I can’t say that I am a ‘Love Island’ convert but I won’t be knocking it as much as I have and I won’t accuse my daughter of wasting her time if she chooses to watch it again next year.