I had the pleasure of meeting Shira Richter, who was one of the visual presenters at the MIRCI conference. Shira uses the power of images to tell feminist/mother-nest stories. She is a pioneer feminist multidisciplinary artist, award winning film maker, loud mouth activist, curator writer and independent scholar who lives in Israel. She has been ARTiculating the maternal for 15 years. I asked her if I could feature her amazing photography which captures the way women are silenced in the economic structures of society. I am grateful to Shira for allowing me to republish her work.

Shira’s artistic photography is featured on the cover of Demeter’s book  Counting on Marilyn Waring-New Advances in Feminist Economic‘. The photo is called ‘Iron Maiden’ and is an actual a photo (not manipulated) of baby bottle nipples. This photo forms part of a large scale solo photography installation titled INVISIBLE INVALUABLES which features photographs of every day mother/parent equipment; pacifiers, bath floors and baby bottles as expensive and valuable gems, communicating the way this work SHOULD be valued.  Inspired by M.Waring’s work, The project premiered on International Women’s month  2011, at the large gallery of Tel Aviv artist’s house. Shira also co-wrote a chapter in this book titled: ‘If mothers counted – status symbols for the invisible art of mothering’ in Israeli culture and society with Dr Hadara Scheflan Katzav, The paper offers a multidisciplinary perspective on mother’s status in Israel and is published below. 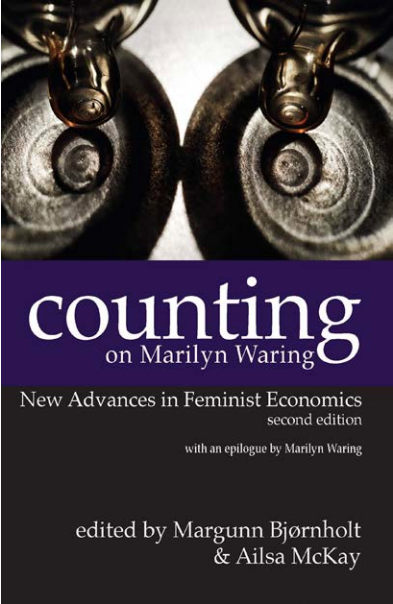 The foundation of this reading is Marilyn Waring’s position regarding the value system of western capitalism in which every merchandise and activity becomes visible via their monetary value. We illustrate how the concept of “value” is loaded with a double meaning and inner contradiction. Israel, a democratic, western, capitalistic, family oriented and militaristic society, puts a high value on motherhood because of public secular and religious ideology, but zero economic value. 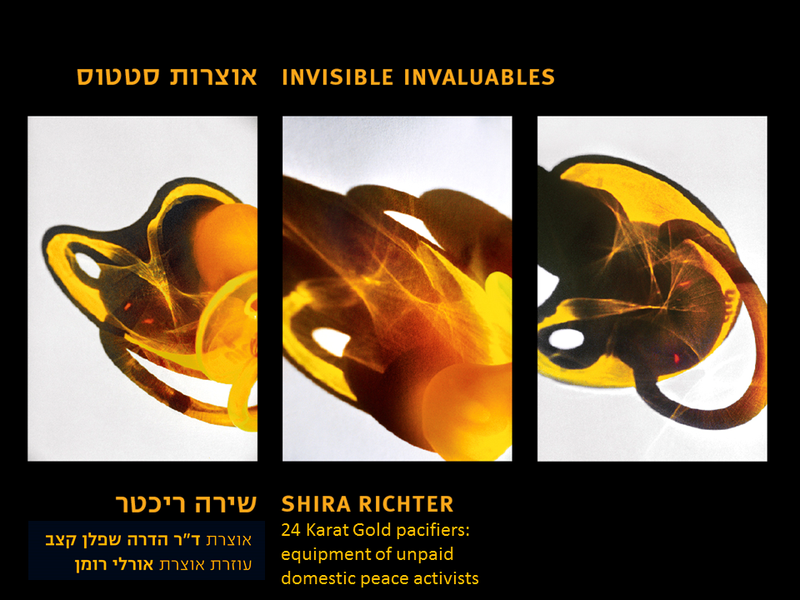 The National Insurance Institute defines the job of mothering as “not working” and a woman who has worked and paid national insurance all her life loses her rights if she works “only” as a mother four years or more. The “gap” between the official “family values” vs. the economic reality is usually against women. 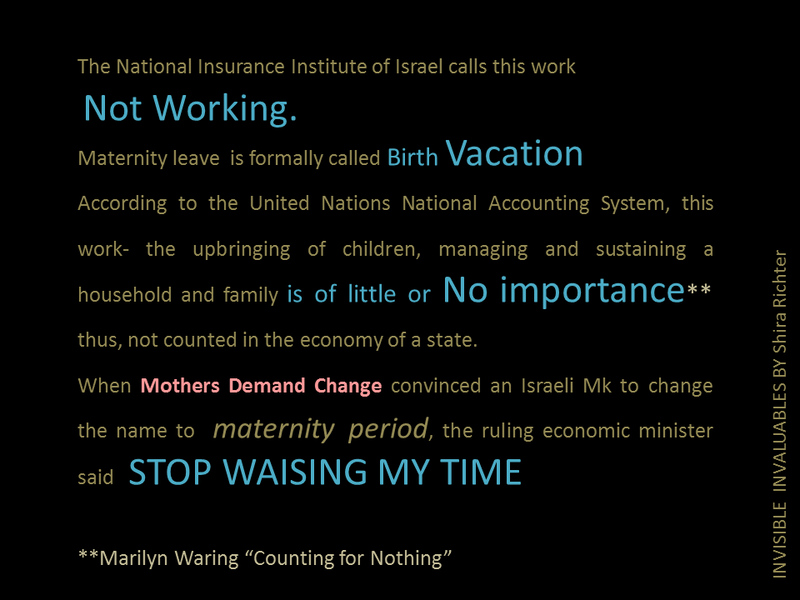 This chapter is the fruit of an ongoing collaboration between multidisciplinary artist, speaker and activist Shira Richter and Dr. Hadara Scheflan Katzav, Head of Art Department at Hakibbuzim College

‘INVISIBLE INVALUABLES’ is one of our major projects resulting from Warings’ influence and inspiration: An exhibition of illuminated photographs extracted from domestic unpaid labor which highlights the irony of the low status of mothering by transforming mundane objects of child rearing and household work into sleek status symbols. The exhibit about maternal invisibility in the economic sphere is both personal and political. It exposes extremely sensitive nerves in Israeli society, and has contributed to a public discourse among both individual women and socio- political organizations. 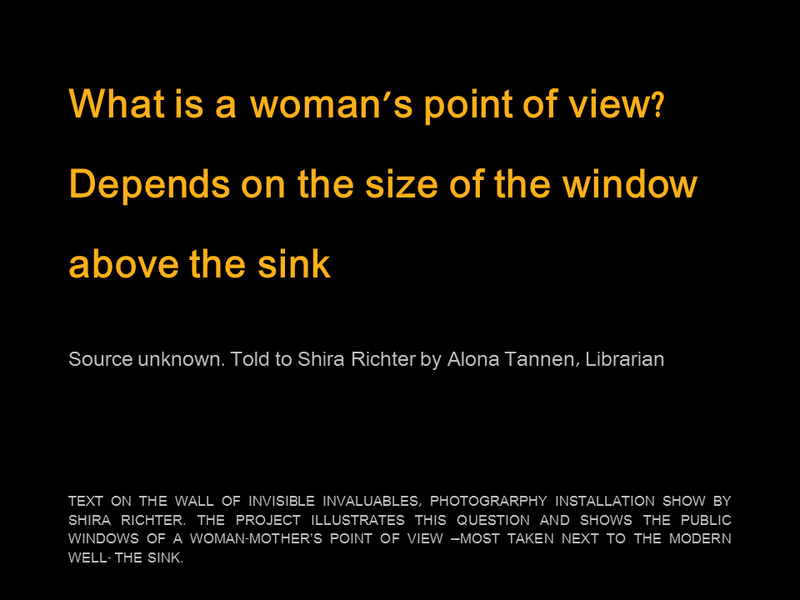 Shira was one of the first artists to Lecture about UN Resolution 1325 calling for inclusion of women’s/mothers voices in conflict areas, together with screenings of her award winning film TWO STATES OF MIND.


Her acclaimed photography project The Mother Daughter and Holy Spirit humorously tells the truth about the physical price of the body transition of a woman into a mother. The project became central in the effort to expose the reasons behind post partum depression.

Her activist work includes raising awareness about women’s erased voices in wartime/area, creating the first facebook page and manifest for inclusion of gender studies in the formal educational system (in Hebrew), and being the catalyst for several mainstream newspaper articles about post partum depression, gender education and – the ‘useless practice of homework’.

Recently Richter participated as first international guest of The Motherload Project in Dallas, and The Women and Money project in Minnesota. She has given visual lectures about Mothers, war and art.

Born in the USA to a secular Jewish family, they moved to Israel when she was a child. Shira is not religious, but adores the religious feminists, combatants for peace, Wasatia and Women wage peace.  She is Inspired by the positive aspects in many religions and bothered by any kind of extremism. She works at a national youth film festival, an adjunct college lecturer, a coach to mother artists. Shira is also a feminist mother of two boys and a feminist co-parent with a loving man (“we also argue!“).

Get 40% off Marilyn Waring’s book until December 15 using coupon code MOTHERS at: http://demeterpress.org/books/counting-on-marilyn-waring-new-advances-in-feminist-economics-second-edition/