Years ago I worked with an extremely nice man who was in his 60s. He took an interest in my career and would advise me on related matters such as what I needed to do to get a promotion. What was even nicer about him was the interest he took in my daughter’s political blogging and in her academics. He had a daughter who had scaled academic heights with extremely good results and he was always keen on to pass on any snippets of wisdom from his parenting. His generosity of spirit was rare and highly commendable. 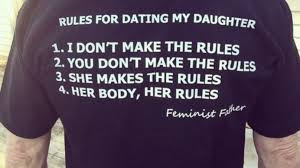 Just as I began to class him as a ‘feminist’ he dropped a bombshell. After a telephone conversation with his wife over what they were going to do at the weekend he turned to me and told me that while men may be very happy for their daughters to be feminists, it was quite a different matter with their wives. His precise words were: “All men want their daughters to be equal to their husbands but not for their own wives to be equal to them”.

Why had I not sussed that one out! In that split second I recognised that my own father had been a ‘father feminist’. My realisation grew tentacles as the day went on and I started to put together a collection of other men I know who practised this type of split duality of feminism. My own uncles, my male cousins, male friends and, at this point, it was perfectly reasonable that I felt a veil of frustration shroud me.

Do feminists applaud this split duality or spit on it? When men class women as ‘keepers’ or ‘fun women’,  i.e partner material or as bedroom conveniences,  feminists rightly challenge this demeaning behaviour. The accusation that these men are ‘guilty’ of chauvinistic behaviour is cut and dried.

With ‘father feminists’ the urge to use the word ‘guilty’, as in ‘these men are guilty of only being father feminists’, was and remains strong but might this not be a case of cutting one’s own nose to spite one’s face? Looked at in a glass half-full type of way these men are raising a generation of feminists but the scent of ‘half-way feminism’ still prevails.

All this brings me neatly to the topical discussion about Donald Trump’s relationship with and reliance on his elder daughter, Ivanka Trump. Given Donald Trump’s history of being a misogynist, sexual predator coupled with his rants over various women one can hardly call him ‘feminist friendly’ or even ‘feminist lite’ despite the fact that he calls himself a feminist. His wife, Melania, has not been a constant figure at his side. In fact she will not even be moving into the White House with him.

The landscape changes when it comes to his relationship with Ivanka. She was constantly at his side during his campaign rallies to become the President of America and has caused controversy by attending a high-level political meeting with the Japanese Prime Minister while being a non-appointed political person. Ivanka supposedly will be running her father’s business interests. It remains to be seen whether Ivanka will be a regular visitor to the White House but all indications so far is that she will play some substantive part in his political career.

Coincidentally enough, there are parallels with another republican candidate, Salmon Chase, a ‘feminist father’ who stood for the Presidential nomination against Abraham Lincoln. Salmon Chase was grooming his daughter Kate to be his political partner/First Lady but this never came to pass because he lost out to Lincoln. A fate that has not befallen Trump.

While men are capable of splitting the atom of feminism into ‘father feminism’ I don’t think it is the progress that feminism seeks nor would want to lay claim to if it is done at the exclusion of other women. Consider this destructive paradox, while a girl’s mother is not encouraged to be a feminist the same said mother is expected to be helping to raise a feminist daughter because that is what the father wishes. Patriarchy does find ways to ensure its’ own survival.