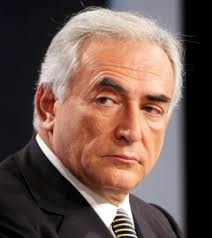 In other words I am talking about the conducive culture of alpha maleness which contains, as an important tenet, the ‘right’ to let loose one’s sexual predilection towards the weaker sex because , allegedly, men just cannot control themselves. My theory is, sadly, greatly substantiated by the plethora of words that have been written in support of DSK. Not many have spared a thought for the maid, the victim in all this.

Readers, it is still a man’s world and the politics of rape still weigh heavily against the female victim. The process of justice may have moved away from asking rape victims what they were wearing that night but the attitudes of some factions of society (witness the French women who have come out in support of DSK) stand against the victim. In fact, the whole of the woman’s movement has been caught up in the self-denying net of DSK’s supporters. Blame has been thrown at the IMF itself for funding feminism which in turn, apparently, breeds promiscuity.

DSK is French and the French have famously always held themselves up as models of propiety on preserving privacy, especially the privacy of the ruling elite. Note, this notion of privacy is solely attached to the sexual exploits of their rulers and manifests itself by omission – not being reported about in the media. There is another word for this type of selective privacy and it is called silence. Silence is a powerful and dangerous weapon when used to cover up immoral or illegal activity. ‘Silence’ is what is said by perpetrators to the children they are abusing so that the abuser can get away with his/her actions. You see, silence is a blanket of oppression which covers a multitude of sins.

The French establishment has wrongly maintained a silence over DSK’s actions for many years. When the journalist Tristane Banon accused DSK of attacking her she was ignored. She said, ‘We fought on the ground…I kicked him, he opened my bra, tried to open my jeans.’ When she appeared on a talk show the host, Thierry Ardisson, made a reference to 14 other women who had suffered similarly at DSK’s hands. It is reported that even President Nicolas Sarkozy had spoken of DSK’s predatory nature. Yet, the culture of complacency continued at the expense of female safety.

The New York chambermaid victim whose identity we do not know has been accused of baiting DSK. The conspiracy theorists speak of this women being a ‘honey trap’. There are holes in this theory. Honeytraps involve two consenting adults with one having an ulterior motive of espionage. The process of Honeytrapping does not involve violence and illegal wrongdoing as has been alleged against DSK nor a criminal trial that will attract global attention. Honeytrappers are willing women and slip away quietly with whatever evidence they have acquired.

Another conspiracy theory questions whether DSK would have thrown away his career for a moment of sexual gratification. Well, because of the culture which tolerated his behaviour and which, perhaps, even egged him on DSK would not have had cause to think that his behaviour would result in his resignation from the IMF. The French notion of ‘cherchez la femme’ reprimands the woman for complaining.

The victim has also been tarred with the brush which, rightly, tars women who ‘kiss and tell’ for money. The latter brigade are responsible for some of the anti-women tirade which accompanies serious crimes committed against women. Sexual victims of rich, famous and powerful men must not be confused with women who sleep willingly with rich, famous and powerful men for monetary gain. The former need protecting. The latter do not unless they are under age.

For as long as privacy is used as a shield, for as long as women remain the underdog and for as long as bad male behaviour is tolerated purely for gender purposes then the rape debate will weigh against the victim in cases such as this.