Don’t believe me? Read the tweet below. Liberals,  it must be universally acknowledged, spend a heck of a lot of time investing in building up a bank of knowledge. We read, we write and we like to be challenged. We attend numerous political events and lectures (I love the LSE’s evening talks). Not for us the stupid sweeping statements such as, “I am a stable genius”, without actually being able to prove this.

It would be so much easier to be a stark raving bonkers right -winger. All they do is indulge in sound bites – ‘Make America Great Again’. What the hell does that mean? Trump’s supporters swallow it hook, line and sinker and chant it like Hollywood produced Zombie clones without questioning what it means.

Liberals would want to know whether it carries a ‘subjective’ or ‘objective’ meaning? Does it cover housing issues and would it stop the privatisation of essential services? What does ‘Great’ mean and look like?

No wonder Liberal Democrats are mentioned as smart people. 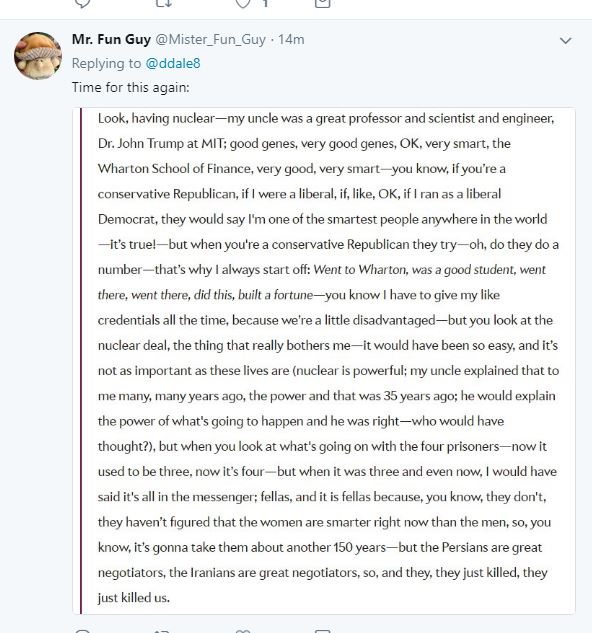 P/S: Dr Trump, the uncle, died in 1985 before the fall of the Berlin Wall which changed the global nuclear agenda. If Donnie Trump credits his uncle for his nuclear knowledge then we have even more reason to have fear because there is a long gap in the President’s knowledge of events and international relations.