If it had been my child involved in the Cincinnati Zoo incident I would have been so relieved that she was alive and well AND I would have been utterly distraught over the killing of the animal involved. There would not have been a middle ground for me but it is easy to make these statements when one is not the mother involved.

I am talking about the situation at Cincinnati Zoo which took place over the weekend and which has provoked a barrage of ‘Mother Blame’. A mother, Michelle Gregg, was visiting the zoo with her four-year old boy. At the Gorilla enclosure the child crawled through a gap and fell in. The Gorilla was holding the boy and dragging him through a stream. The authorities who are experts deemed the situation as being a ‘danger to life’ and shot the Gorilla.

How many of you mothers watched the video on TV which has been shown any number of times on the news channels and thought ‘there but for the grace of God…’? Let’s face it, while we may not have had our children climb into animal enclosures our children, nevertheless, have been involved in some ridiculous situations that would have attracted ‘Mother Blame’ if the outcomes had been judged to be extreme.

In 2002 or thereabouts I took my then 3 year old daughter to Hampton Court for a lovely summer’s day out. As soon as I unstrapped her from the buggy she dashed across the garden towards a stream. She had spotted a lovely Swan gliding on the water. I couldn’t run fast enough to keep up with her but my hysterical shouting worked. She stopped short of jumping in. There was no dangerous animal involved but the point I make is that a mother cannot have complete control of her child at all. This is a point that Michelle Gregg makes on her Facebook post (see below) and it has attracted a large number of comments.

There is a constant conflict between keeping your child safe and being in complete control, physically, of that child. The latter is just not possible. There is too much happening in the world for a child to be completely sedate and not run off seeking new experiences without a thought about the dangers involved. The saying ‘it takes a village to raise a child’ contains an assumption that others need to assist too. As a specific example, did the zoo have enough health and safety measures in place? 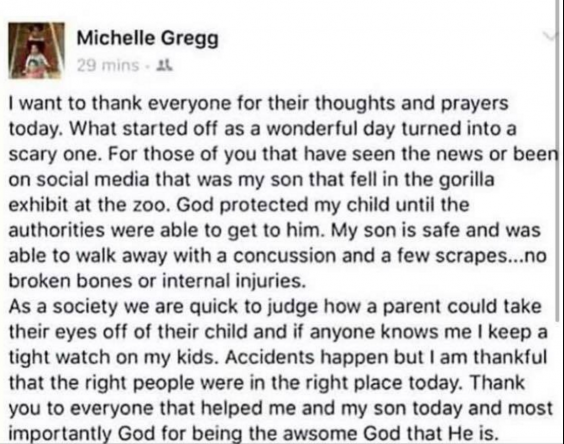 Also, consider this contradiction where children are shown pictures of cute animals displayed in brightly coloured books. They are taught to make animal noises from a tiny age because it is cute to do so and makes parents laugh. Parents buy their children animal costumes and go weak at the knees at the cuteness of it all. Pictures are posted on social media which elicits a collective ‘aaahh’ from family and friends. Where in this madness is a sign that a child could pick up on about animals being a danger to them?

‘Mother Blame’, however, does not have a recognition of causality. The volume of this blame is expressed along a line of continuum from moderate to extreme. Michelle Gregg’s comment on her mothering sort of alludes to this. She justifies herself by writing that, “…I keep a tight watch on my kids. Accidents happen…”

Was she unlucky that a dead animal was involved? If the child had been extricated without a shot being fired would the ensuing picture have been of a mother talking about ‘boys being boys’ which would have attracted empahthy? If the Gorilla had harmed the child in full view of onlookers would the mother still be blamed?

The point is that the variables of ‘Mother Blame’ are numerous and are determined by society. While a mother cannot be in control at all times society does expect her to be so. Michelle Gregg, has not helped herself (see her Facebook post above). But, then again, I am judging her for not showing any remorse towards the fact that a protected species of the Gorilla world had to be shot dead. Who is to say that she is not sorry?

It is so easy to apportion blame but much harder to unpack that blame narrative.

This anthology brings together creative and scholarly contributions from feminist academics and activists alike to provide a dynamic study of the many varied ways in which mothers are blamed and shamed for their maternal practice. Importantly, it also considers how mothers resist these ideologies by engaging in empowered and feminist mothering practices, as well as by publicly challenging patriarchal discourses of “good motherhood.”

Sharing this blog post by the fabulous Jane Chelliah! In this post, she discusses the Cincinnati Zoo Gorilla incident and the issue of Mother Blame. You can buy Demeter’s Mother Blame book from our website for 40% off the cover price until June 10, 2016!