This article was originally published by the Red Elephant Foundation which is an initiative that is built on the foundations of story-telling, civilian peacebuilding and activism for sensitisation on all drivers of peace – gender, race, nationality, colour and orientation. The initiative is titled “Red Elephant” to stand out as a vehicle that projects stories that must never be forgotten: stories that show you such courage that you should never forget, and stories that show the world such profound lessons that the world should never forget. In doing so, the initiative aims at creating awareness and opening up channels of communication towards creating societies of tolerance, peacebuilding and equality.

Being a Feminist Mama: How did that happen?
There is a photograph of my daughter when she was aged two, which I took and particularly cherish. She is looking into the camera and there is a touching transparency of total trust and belief in me as her mother. I can pinpoint that moment as being the pivotal one when I became a Feminist Mama. It dawned on me that I had to become an empowered mother if I was going to raise a daughter to realise her potential in a patriarchal society that still trips females up. Feminist Mamas challenge gender stereotyping in every facet of life thereby helping to create a society in which they and their children can thrive. My daughter started a political blog at the age of 10 and is the youngest political blogger in the UK which has attracted some attention. People are constantly amazed at a girl being involved in politics. 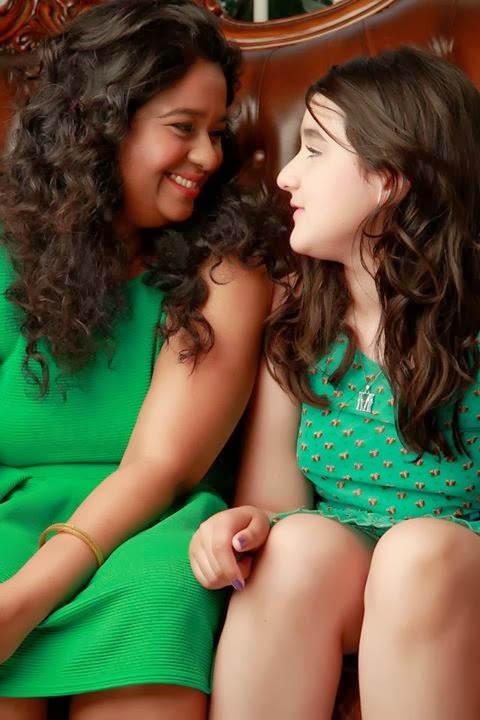 What does the term “Feminism” mean to you? One hears of so many different interpretations, and of the war of words that challenge each interpretation…


Feminist mothering does cause some controversy because it challenges the traditional picture of a mother who enjoys staying at home tending to everyone’s needs excepting her own. To me, Feminism is a multidisciplinary approach in pushing forward the female agenda for equality. Feminist Mothering takes the concept of Feminism further – mothers who wish to extend their feminism to child-rearing.

Bringing up a daughter at any age is possibly not easy – back then, things happened covertly, and now, things still happen covertly – albeit with a little more dialogue and awareness. What do you see as the most significant issues in the process of bringing up your daughter?

Violence against women and the normalisation of the sexualisation of childhood are the two most worrying things for me. Betty Friedan, author of ‘The Feminist Mystique’ published in 1963, wrote about how clothing manufacturers were making adult style underwear for girls and how girls were not prioritising their education because their only expectation for themselves was to conform by getting married soon after leaving school. Have things moved on a lot since then? Yes and no, is my answer. It was not that long ago that girls’ were aspiring to be a footballer’s wife or girlfriend. ‘WAG’ (wives and girlfriends) was the acronym used in the Britain. Many young women are still conditioned by a desire to attract male attention and, more worryingly, feel validated by it. While there are no formal barriers to female education one wonders why more women are not going into politics or the science fields which are still seen as male arenas. I want my daughter to have a strong sense of worth and self-esteem that is shaped by her own actions and decisions and to gain a good education. It is the latter that allows women to have economic independence.

As a feminist, do you hope for your daughter to be one, too? What is your most important piece of advice to her?

My daughter who is now 16 spoke at an international Feminist Mothering hosted conference by the Motherhood Institute for Research and Community Involvement four years ago.  She said that Feminist Mothering had helped her “…reach her potential” and had given her confidence and a sense of security. She also spoke about the positive messages of gendered education (where the mother teachers her children to recognise and overcome boundaries that face girls). My most important advice to her is to always retain her religious Christian faith and Feminist values. The anti-religious feminist movement blames organised religions for the oppression of women and they are right in some ways. However, interpretations of religious texts are often constructed by the patriarchy and it is possible to practice a faith without compromising on one’s gender.

What does being a woman mean to you?
Feminist Mothering in the third wave has to be the most exciting period in feminist mothering history so far. When the feminist mothering scholar Adrienne Rich wrote her book ‘Of Woman Born’ in 1976 women were still trying to figure out ways to push back against the traditional construction of a mother. In fact, Adrienne Rich did not offer a solution in her book and many feminist scholars have since come up with answers. Also, the advancements in social policy, technology and the birth of protest movements have allowed me to develop a progressive maternal identity. I was involved with Occupy London which opened my eyes to the way the capitalist system affects mothers; being a blogger brings me into contact with the feminist online world; and enlightened social policy takes into account the many intersections and dimensions of womanhood e.g., mother, woman of colour, single, married.