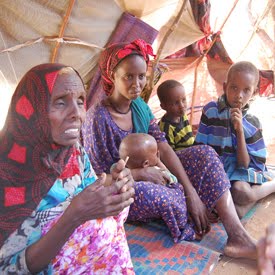 For days now I have been watching with dismay the scenes of mothers carrying and dragging their starving and dehydrated children into camps being run by international charities such as CAFOD and Doctors Without Borders in Africa. The Horn of Africa (the most eastern part of the African continent) has not had any rain for two years resulting in a severe food shortage. The extra burden of rising food prices has made eating out of the question for millions in the area.

Why in this modern day are we watching scenes of babies crying in pain and dying in front of TV camera lenses? Why are we watching helpless mothers watch their children die of starvation? All they need is food, water and medical supplies. The solution is as simple as that yet it seems as if much of the globe has been covered with a sticker which states ‘nil by mouth’.

Starvation in modern day is a political issue. We can’t keep blaming the weather anymore. If globalisation can result in multinational corporations setting up bases across the world; people migrating to seek their fortunes elsewhere; and the financial systems able to work around the clock to accommodate different time zones then why not a strategy to eradicate starvation?

Mothers of starving and dying children are caught up in a political nightmare. It is only by the accident of birth that you or I aren’t one of those poor women. Thus, we owe it to them to raise awareness.