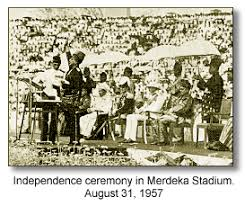 Malaysia celebrates Merdeka Day today. Translated into English, it means ‘Independence Day’. Pomp and pageantry mark the day every year as it did today in Malaysia. The anniversaries are milestones of the growing number of years since the country gained independence from Britain. It has been six decades. 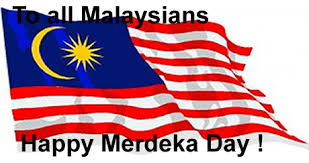 Malaysia is undergoing a political sea change that would have been thought impossible only a few months ago. The tenets of Liberalism which are under threat in Europe and American seems to be enjoying a revivalism in this tiny country. The Washington Post published this on 9 July this year : “Liberal democracy has its challenges. Even in 2018, however, social movements have upended entrenched single-party regimes in places such as Malaysia and Armenia.

From a personal point of view, I have been fixated by this paradox. I was born in Malaysia but have lived all of my adult life in London. While I am far more au fait with the British way of life, I have a huge sentimental attachment to the country that I was born and spent my childhood in.

Colonialism is the bridging factor in my life. Post-colonial discourse has occupied much of the political debate in Britain this year what with Windrush, the Commonwealth Heads of Government meeting in London and the appointment of the Prince of Wales as a future head of the Commonwealth and, just this week, the topic arose again in relation to Theresa May’s visit to Africa. The shared history between the colonials and coloniser plays on.

Professor Ashley Jackson, a British expert in Imperial and Military history, has written about how “British possessions in Malaya grew exponentially…” during the days of the Empire. The British formally made Malaya (as it was known then) a colony in 1867 and withdrew in 1957. It is no wonder then that the British left an infusion of cultures behind. However, along with independence comes a sense of wanting to forge an independent sense of self.

The theme for this year’s Malaysian celebrations were comprised of four elements, patriotism, public order, national security and unity of the people expressed through a song titled, Sayangi Malaysiaku (Love My Malaysia).  As post-colonial discourse, these elements do seem to embody Malaysia’s one time stated hope of putting people and country first. These noble aims have been renewed this year following the election of the opposition who have promised freedom of speech and a free press among other things.

A sense of Utopianism now occupies the space where despair once lived within progressive Malaysians. One hopes that there is not a clash between the way things turn out and hope. Max Weber, the famous German sociologist, once said that out of the tension between hope and reality, a sense of fighting for a meaningful future can emerge within which criteria is set for the way the world ought to be.  According to Karl Mannhein, who was also a German sociologist,”With the relinquishment of Utopia, man would lose his will to shape history and therewith his ability to understand it”.

Here’s hoping that the collective Utopianism of Malaysians globally will be a dynamic force for the country’s present and future.