I was watching the Newsnight interview with Arundhati Roy regarding her views on how nationalism has been a potent force in encouraging the Indian rape culture. The brand of nationalism that is practised in India is extremely dangerous for the way that it cuts across class, caste, gender and age in commanding an uber sense of loyalty to religion. I contribute to ‘Feminism in India’ which is a leading South Asian feminist website. Below is an article which I wrote for the website after witnessing the masses of Indian nationals living in the UK who came out onto the streets in Westminster for Modi’s visit to London in April. 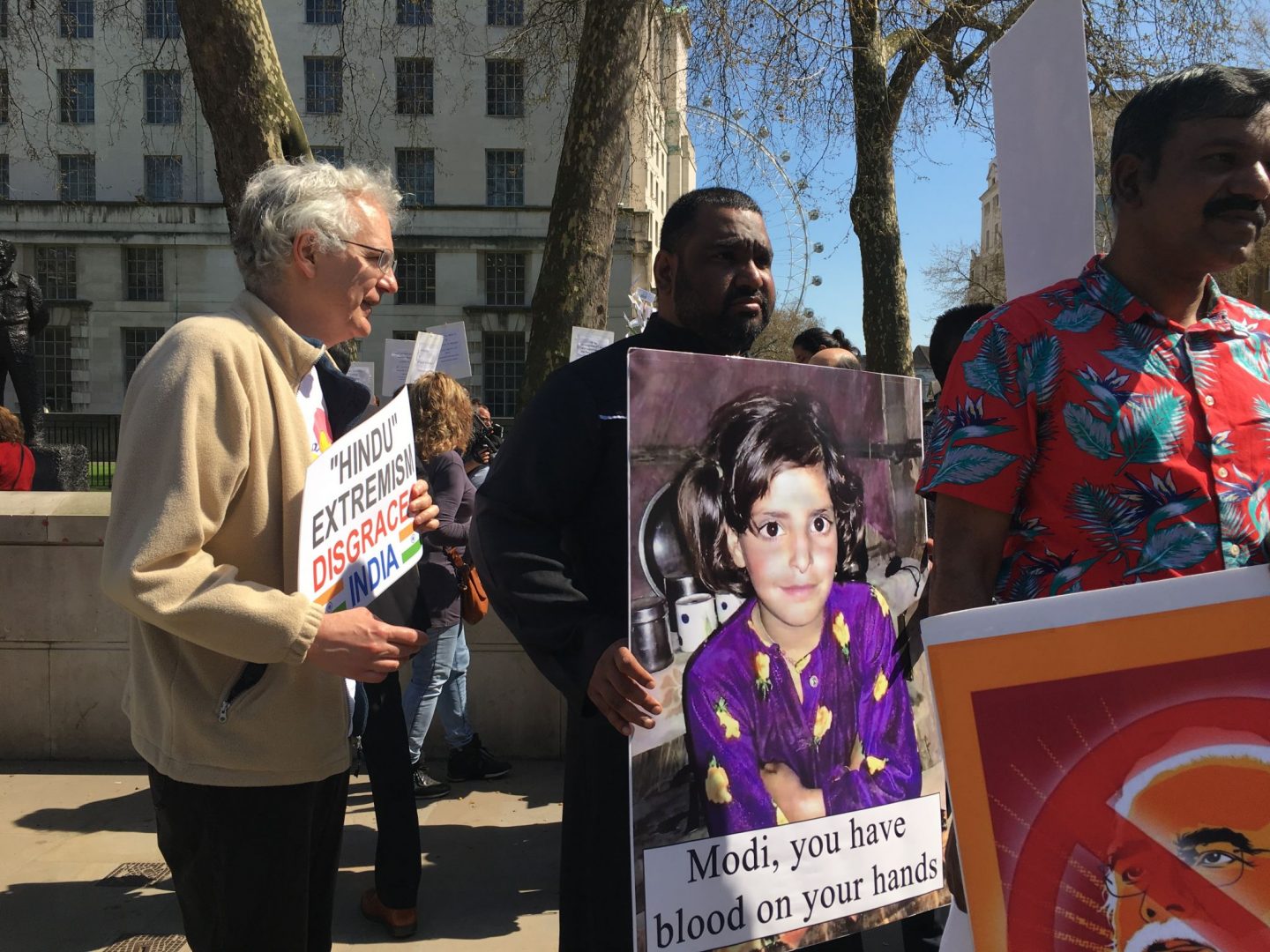 You could not have missed that Narendra Modi was in Central London for the hundreds of Indian men and women who turned out to either demonstrate in support of or remonstrate against him. Modi was attending the Commonwealth Heads Summit. In all my years of living in London I have never seen quite so many Indians crowded together in one area within London. Such is the power of Modi but it has attracted much controversy in the British press.

I went along to observe and report for Feminism in India. It was an experience that shook me and left me wondering whether there is any such thing at all as ‘Indian Values’ or have these, if they ever existed at all, been transmuted into ‘anti-women Cultural nationalism’.

I felt as if I had walked into a parallel universe. Both pro-Modi and anti-Modi groups were in attendance but situated a little distance away from each other.  I happened upon the pro-Modi group first but it took me a few seconds to recognise this. The reason for my initial bewilderment was because this group consisted predominantly of women. They were full of defiant swagger and were chanting pro-Modi phrases.

Where was the recognition of the hostile environment that has been created by Modi’s politics which does not take paedophilia and rape seriously? Where were the banners calling for justice for Asifa? Instead there was merry making and music and colourful clothing that one could have been forgiven for wondering whether a wedding was taking place. Quite ironic considering that there are funerals taking place all over India for victims of rape and paedophilia.

The anti-Modi demonstration was, by contrast, much much smaller and serious. They held banners with Asifa’s photograph and against rape. There was no music and their mood subdued but concern over the level of rapes in India has been reflected in UK reporting.

If the numbers of women who turned out in support of Modi in London are anything to go by then Cultural nationalism is Indian feminism’s enemy. I don’t live in India and can only comment on what I saw in London.

I spent all day unravelling my long-held belief that Indian values equalled Liberal values. Perhaps my beliefs were far too subjective and devoid of evidence. There was so much to unpick. Little girls have been raped, tortured and murdered. Their relatives denied justice. The father of one rape victim was killed while in police custody. Having endured colonialism should South Asia not have a higher sense of justice? Even on a simple level of justice paedophilia should not be tolerated. 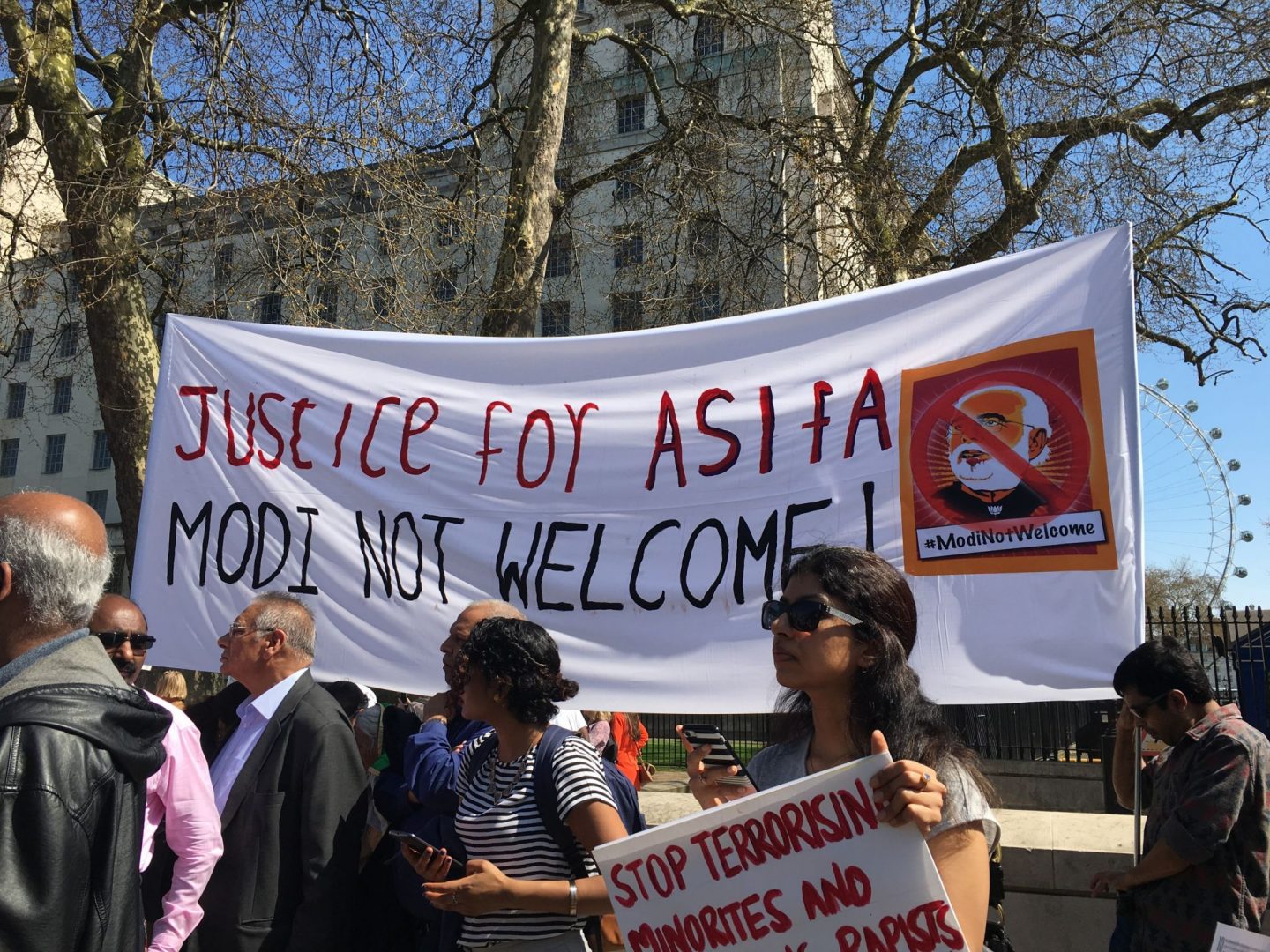 After a day of contemplation, I began to see quite clearly the causal connection between long-held Indian prejudices and the current anti-female dogma. The female value was demeaned right from decades ago when female babies were aborted without a hesitation. I remember ‘aunties’ talking about their selective abortions quite openly in my childhood.

Then there was the stigmatisation of women for not dressing in the right way. This fanned out to the use of ‘class’ as a dangerous cleavage between ‘deserving’ and ‘undeserving’ women. When girls from well-off families were raped they were referred to as ‘low class’. ‘Undeserving women’ were blamed for rapes and sexual violence, sometimes even for domestic violence. People turned a blind eye to so called ‘cultural practices’ of cruelty to daughters-in-laws.

Those who choose to ignore the plethora of wrong doings are foolish and naïve. In Nazi Germany, there was a Pastor called Martin Niemoller who railed against the German Intellectuals for not speaking up against Hitler. Niemoller’s ever famous phrase, “ …then they came for me-and there was no one left to speak for me” is part of a wider speech given about how society did not speak up for various persecuted groups as it happened till, finally, the silent were persecuted themselves.

Those who tolerate a lack of female justice take delight in the fact that they see themselves as belonging to some special cultural group which, they think, affords them a high level of protection. Their anti-female hatred is subsumed within Cultural nationalism. What they don’t realise is that any form of nationalism is an abstract concept. It is not material. In practical terms, what this means is that NO woman is safe while hatred against women prevails. When a woman who adheres to the dominant Cultural nationalistic fervour goes out she is just as easy a target as a woman who isn’t. (This, by the way, could apply to any anti-feminist of any race who thinks that the rape culture is contrived and overblown)