I am living a paradox when it comes to my daughter. Much as I hate the neoliberal system that we live under I am, nevertheless, priming her to become a successful citizen of the system which I detest even though I have to function according to its rules. Exams are a big feature of this system as a way of demonstrating one’s intellectual capability but let’s never underestimate the enormous strains and stress that these methods of sifting the supposed best from the rest places upon our kids.

Below are two pictures of my daughter. The one on the left was taken last night (16 May) on the eve of her first AS exam and the picture on the right is how she normally looks. The face that she is pulling, as seen in the photo on the left, was a spontaneous reaction when I asked her how she was doing. I told her to hold the look of despair while I reached for the phone and snapped her.

While there is wide spread reigned acceptance of exams being a necessary tool for testing someone’s knowledge and ability it is a flawed system.

The level of pressure being exerted is top down and leaves little room or no room for debate over an alternative system of testing. The Government’s push on SATS, STEM (science, technology and maths) subjects and for a comparative calibre of British students to emerge to rival those from South Eastern countries e.g China creates a layer of a hard push narrative that operates on a downward motion. It is much like a horizontal thick black cloud that does not stop pushing down till it reaches its’ intended victims, our children.

Consider this, ChildLine has reported a rise in the number of calls that it is receiving from children taking exams. A total of 3,077 cases have been dealt with which represents a 9% rise on the previous year. Obtaining good grades and a fear of not having revised enough are some of the issues being raised by these children.

Some exam questions do not even seem to be age relevant and this was revealed last week in the form of a maths SATS question that even parents were unable to answer. Last year a GCSE maths question even made it onto Twitter because it was deemed impossible to answer by thousands of children around the country. Sky news brought a maths expert on who taught the nation live on TV how to answer it. We expect 15 year olds to be able to do these things?

Consequential to all this exam taking comes a host of other problems such as children suffering from low self-esteem because they perceive themselves as ‘not being good enough’; fear of not being able to get into the university of their choice because their grades don’t match up; or having to resit papers and feeling ashamed of this because it marks them out from their friends who are progressing onto another year of education.

This is the culture that I grew up in in Asia and it is rotten. The ‘Tiger Mother’ method is just plain stupid primarily because not every child is capable of getting straight A’s. Also, exams are outcome based and the problem with this approach is that it ignores any inherent problems with the system or any structural issues, such as inequality, that arise from the same system that devises education.

In a scenario that reflects the latter would a child who lives in an overcrowded situation or who is homeless and is living in a B&B be able to give his or her best to her exams when they are constantly being interrupted by other people? Conversely should a child such as my daughter who is able to revise in the comfort of an encouraging home environment be expected to do better? Does she deserve the same amount of praise if she receives A grades as a child who battles through his or hers harsh living conditions to also obtain As? Is overcoming physical and mental adversity a factor at all that should be considered when the grades are being dished out?

We put our children through a lifestyle that has no boundary in the way we seek a balance between work and life. Even top corporations are constantly looking at ways to shift their work culture in order to accommodate staff needs for a life outside of work. Yet, we foist just the opposite on our children. 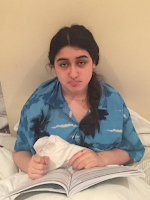