‘Suitcase’ is authored by Nicole Cooley, a professor of English and the director of the MFA Program in Creative Writing and Literary Translation at Queens College—City University of New York. 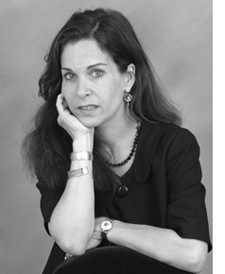 “Suitcase” documents Nicole’s experience as the mother of a new baby living in NYC right after 9/11. In those first weeks and months after the attacks, when no one had a language for what had happened, citizens were told to buy gas masks, store antibiotics, save emergency supplies, avoid crowds, not fly on planes. According to Nicole the advice was “dizzying”. She describes how she could smell the burning from the World Trade Center inside her apartment.

“The city and the country felt out of control. And as a new parent, I felt overwhelmed with fear for my daughter, wondering how I could raise her in such a world in which she would never be safe.​I wrote the poem as a Ghazal, a Persian form that so often memorializes and idealizes a beloved, a form that uses repetition to increase tension. “

Here, the repeated word is “suitcase.”  The last line of the poem is supposed to use your own name, and so Nicole invoked the letters stamped on her suitcase, N.R.C. Her daughter is now a teenager—and she has a second daughter too–but Nicole says that her early experience as a mother is forever marked by living through those months.

we were told to pack in case of
a new attack. Girl’s suitcase,

my grandmother’s gift for those first sleep-overs.
I fill it with duct tape. Cipro hidden in the lining of the suitcase.

The paediatrician refused to give the drug but, yes, I begged, cried,
I demanded. In the Before, this would be my daughter’s suitcase.

While she slept inside me, I’d pack a silky nightie, toothbrush.
In the third trimester, I’d lie in bed and arrange the suitcase.

Now: Swiss Army knife. Distilled water. Potassium Iodide
to carry with us at all times when we leave our home. In case of—

tablets to swallow immediately as the subway fills with smoke.
This city permanently on Orange Alert, the ready suitcase

waiting while I nurse my daughter, watch the news.
In the After, another day of jewel-blue sky, I pack the suitcase,


seal the windows as we were told against possible chemical attack,
but still we breathe in the burning, the ash, the soot.

Plan an evacuation route. With each warning, the city shuts tunnels,
cuts us off. We’re packed and ready, with our suitcase.

I watch the news. I already know I won’t have another child,
not in this city. Packed and ready for the next attack: our suitcase.

Now the baby no longer fits in the circle of my arms. Pregnant,
I’d dreamed the girl I’d birth as safely miniature, kept in a suitcase.

You must be ready, the TV tells us. To leave your life,
for the safety of your family. I lay my daughter in the suitcase

stamped with my initials, N.R.C., letters engraved
long ago

on a headstone, and now not mine, not hers, no one’s suitcase.