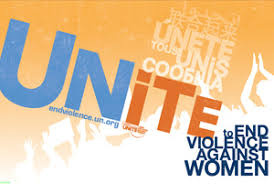 Never have I known violence against women to be as rife and common place as it is now. The arrival of social media is often touted as a reason for the rise in awareness of global problems, citing the speed of the transfer of information as being the reason, rather than there being an actual rise in the crime being perpetrated. So it is with violence against women where the fact that it is a daily occurrence does not make the news so much as the level of violence and number of men involved which warrants the act of violence as being newsworthy.

Rape is the most common form of violence carried out and it is on the rise in Asia (witness the Delhi demonstrations), Africa and in the Middle East. Nothing much seems to have changed in Western countries either. It is a global problem. What unifies all of us as women regardless of our location on the world map is a right to feel secure and safe when going about normal life. I recently visited a country in Asia and was told that women were too afraid to even venture out to the local shops on foot for fear of being robbed or kidnapped. Sadly, the women I spoke to viewed their fear as a domestic situation rather than a social policy one.

Taken on a continuum of extreme, placing women’s fears for their own safety in the domestic arena leads to women then viewing their choice to not venture out as being a freely chosen option. The flip side of assuming that the home is the safest place for a women is the fact that domestic violence is on the rise too.At which point then do the authorities step in and implement safety intervention measures?  Perhaps it is time for women’s security to be placed on a global high-ranking agenda like the World Economic Forum’s annual meeting at Davos or at a G something or other conference. If women hold up half the sky then we need to be outside the home doing this.