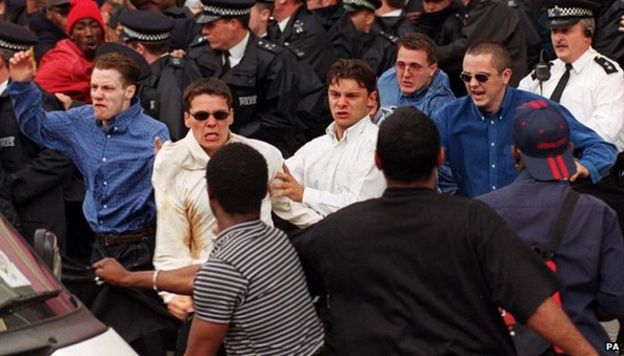 I was somewhere among the hundreds of people who turned up on this day in 1998 to lend support to the Lawrence family during the Macpherson Enquiry. Stephen Lawrence had been dead for 5 years by this time. I watched the killers come out of the building.

They were utterly devoid of any shred of shame, humanity or remorse. They goaded the crowd through hand gestures and bodily swagger. Their confidence had been bolstered, I am guessing, by the lack of evidence and an ensuing conviction.

I wondered then as I do now – what was it in their upbringing, social environment and personal characters that had contrived to give them such a sense of false superiority? They had killed a Black boy but quite obviously were racist down to every cell of their body so as not to give a damn about their actions and consequences. You had to be there to see it.

In the three part documentary screened on BBC1 we learn that Enoch Powell was a hero of theirs. We see them spouting utter hatred for people based on skin colour. These boys personifed that (ugly) American label of ‘White trash’. They suffered from a feeling of White superiority despite being uneducated as compared to Stephen Lawrence who had dreams of being an architect.

Has the 20 intervening years made any difference? I don’t think so. Trump’s supporters suffer from high doses of White superiority malaise. In the UK, UKIP strives to keep this going. The Tories are hanging their heads in shame over the Windrush fiasco. And somewhere a White community is still colluding over withholding evidence in the killing of Stephen Lawrence.