Erik Solheim was a key negotiator representing the Norwegian Government in seeking a peaceful outcome to the Sri Lankan war. Wikipedia describes Mr Solheim as being ‘one of the most recognizable figures in the peace negotiations…’. He was a key figure in brokering the 2002 ceasefire agreement between the Sri Lankan Government and the LTTE Tamil Tiger leaders; and convinced the LTTE to agree to unconditional peace talks in 2006. He is now the Chair of the OECD Development Assistance Committee (DAC).  As the Commonwealth Heads of State meet in Sri Lanka it seemed timely to ask Mr Solheim for his views. There can be no moving forward, after all, without an acknowledgement of the past.

Q:  Given that you worked so hard to bring peace to Sri Lanka it must follow that you are now distressed by the plight of the Tamils there who do not seem able to live peacefully. Looking back do you think that anything could have been done differently during the war years?

A: With the benefit of hindsight a lot could have been handled differently during the peace process. I will cover that in my upcoming book, written jointly with Vidar Helgesen and Mark Salter. There were two main reasons why the peace process after many successes ultimately did not bring peace. The lack of cooperation within the Singhala elite, i.e. between UNP and SLFP. And the fact that the LTTE-leadership while accepting federalism in principle did not dare embrace this as the solution.The Tamil struggle for legitimate rights is not over. It will continue as long as there is no Tamil self-rule in the northeast and as long as Tamils are treated as second class citizens in their own land. The struggle must be fought with nonviolent methods. The international community should support this.

Q: In the latter part of the war Tamils were waiting for a ‘big ship’ to arrive which was thought would rescue them. You have spoken about a plan that was afoot to send a big ship to the north or east of Sri Lanka. Could this possibly be what the war victims are referring to? If so, what went wrong? 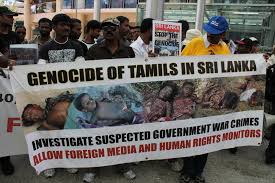 A: When the outcome of the armed conflict was clear to everyone, we tried to convince Prabhakaran to accept an organized end to the war. In this scenario the LTTE would hand in weapons while all cadres would be registered by the UN or one of the main powers, possibly India or the US. In such a plan a ship would probably have been used. It would have been very difficult to harm anyone after procedures involving global powers.This never went from idea to reality because LTTE rejected this idea. It would have saved tens of thousands of lives. It is important to add that LTTE’s lack of regard for the life of the civilians as well as of the cadres, can not in any way be used as an excuse for the deliberate shelling of civilians by Sri Lankan armed forces. Nor can it explain why many Tamils were killed after handing themselves over to the Sri Lankan forces, think of Nadesen, Puleedevan or the son of Prabhakaran as examples. And obviously – use of rape is a war crime, which cannot been excused pointing to LTTE intransigence.

Q:  Tamils who fled Sri Lanka tell me that they have no faith in the UN’s ability to intervene in conflict situations nor do they believe that others countries are interested in humanitarian issues. I think this is an important angle to explore given that intra-country wars are escalating. What do you think ought to be the entry level of intervention by other countries and the UN?

A: Secretary general Ban has taken the unprecedented step to apologize for the behaviour of the UN in the last phase of the war. That will not bring dead people back to life, but it is an important step in the process of dealing with war crimes as well as preparing UN better for future conflicts.I encourage everyone to read the Petrie report, commissioned by Ban Ki-Moon and written by Charles Petrie. The report is chillingly clear on what happened in Sri Lanka. It shows how the UN was bullied around by the Sri Lanka government.

A: All countries must make a much stronger effort to really look into these applications on a case by case basis. There are many Tamils (as well as also some Singhalese and Muslims) who are under threat in Sri Lanka and therefore should be given asylum abroad.