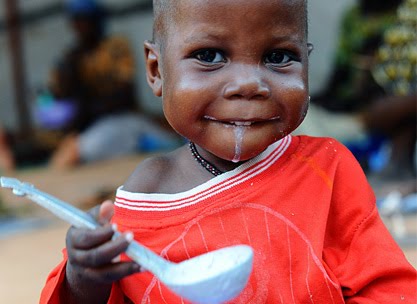 I am always struck at the dichotomy between the way feminism is practised in the developed countries and in non developed countries. What we in the former countries consider to be sometimes a pain in the neck chore is, instead, considered an ‘Essentialism’ of mothering for mothers in the latter countries. Cooking and sanitation are two examples but for the purposes of this blog post I will concentrate on cooking.

Save the Children has released a report called ‘A Life Free From Hunger’ which starkly lays out the statistics for hungry children. Nearly half a billion children’s lives will be affected by malnutrition over the next 15 years if world leaders don’t act to tackle hunger. Millions of lives, however according to the report, can be saved through teaching mothers about nutrition.

There is an army of volunteer health workers in Afghanistan who conduct cookery classes. Not for them the expensive Cordon Bleu classes that we in developed countries pay for nor the Nigella Lawson type cookery books which we get as presents. For the Afghan mums their cookery lessons consist of each mother bringing a nutritious ingredient such as carrots, rice, potatoes, egg, oil or salt which the health worker then combines together to produce a shared pot of healthy living meals. In this way, mums are learning how to stave off malnutrition.

The simplicity of this moves me because it demonstrates the purity of feminist mothering which is about doing the best for your child under all circumstances. While mothers in Afghanistan may have no notion of feminist mothering given the extreme patriarchal conditions they live under they still undertake the chores that mothers in developed countries do which begs the question is cooking an Essentialism of mothering?