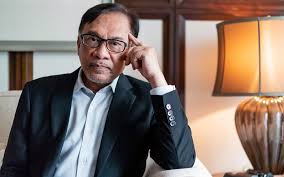 Anwar Ibrahim must be one of the most well known politicians globally to hail from Asia. He is a rare politician from the Asian continent who manages to straddle both East and West through an understanding of the interplay between cultural and political practices. I watched him speak at the London School of Economics a few years ago after his release from prison the first time around on trumped up charges. He commanded an adulation which many Western politicians could only dream of.

Anwar’s rhetoric reeked of Liberalism at a time when Tony Blair was in power in the UK and George Bush and his neocons in the USA were still looking for ways to export Liberalism globally. It was in keeping with the Western world but at odds with the pseudo authoritarianism that was manifest in Asian politics.

Sometime after that UK visit Anwar was imprisoned again after a second round of trumped charges. In a surprise twist, the government that drove him into incarceration both times was voted out of power in May 2018. The new government arranged for Anwar to receive a Royal Pardon which saw his early release from jail.

On 13 October Anwar is expected to be returned to power in a by election being held in Port Dickson, a beachside resort where I spent many family holidays while growing up in Malaysia. In an agreed power sharing agreement with the current Prime Minister, Dr Mahathir Mohammed, Anwar is expected to become PM in 2021.

While the outcome of the by election is not in doubt the big question is whether Anwar is the same man who was once lauded for his ‘Reformasi’ movement? It was a protest movement which saw hundreds of people take to the street to demand democratic reforms. Anwar was the firebrand who stirred up a thirst for Western like democracy.

So it came as a surprise when Anwar, in a recent speech, derogatorily used the words  ‘super liberals’.

Viewed in context, Anwar seemed to be denigrating people who were advocating for minority rights. It has been taken to refer to people who stood by him and supported him when he was imprisoned. The Liberals, in other words. By using a super charged word, ‘super liberals’, Anwar has reignited the anger expressed by people before the opposition’s electoral victory in May who wanted change.

It is a strange use of a word for a man who wrote a book titled, ‘The Asian Renaissance’. In the book Anwar referenced John Locke and the “inviolability of human life”. He went on to write that, “Lest we forget, democracy itself can only flourish in a nation at peace, where there is mutual tolerance and respect between communities and ethnic groups”.

Anwar now seems to be contesting the validity of what he once espoused.

Does Anwar Ibrahim have two faces? If so, which one is it that will be unveiled when he is returned to power?