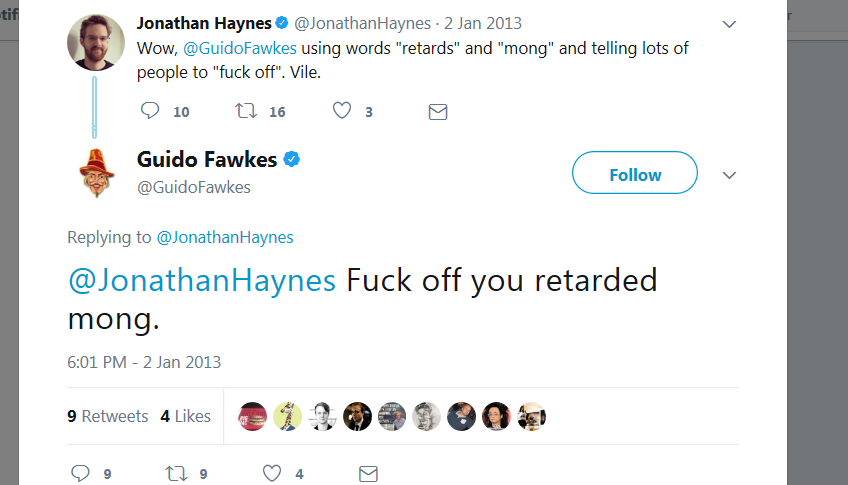 Given the current psychological condition of the convenient use of one’s age as an abdication of responsibility for irresponsible talk that comes out of one’s mouth, I thought I would set in context right at the start of this post how old Guido Fawkes was when he tweeted the above message.


At that age I don’t believe that there is much one would say either unintentionally or in anger about a disadvantaged group of people. Disability rights and issues has been well publicised enough as a socio-justice issue that one would have had to have been living in a cave to be ignorant of it.


I care because I have a niece with Down’s Syndrome whom I have blogged about before.


Lest anyone was in any doubt as to the crux of Guido’s intended slurs, which was to use disability, he gold plated the tweet with ‘retarded’.


Way back in 2004 the BBC published a list of  ‘worst words’ to use when referring to people with disabilities with ‘Mong’ featuring at Number 4.  There has been more than a decade of sufficient awareness of disability rights. Guido’s tweet came a year after the UK hosted the Paralympic games in 2012. The games were the apotheosis of disability awareness raising.


I stopped reading Guido’s blog years ago because of the constant references to female genitalia and the use of various forms of obscene language. The intellectual content displayed in the comments left by readers is something that one hears from football fans on tube trains during match days.